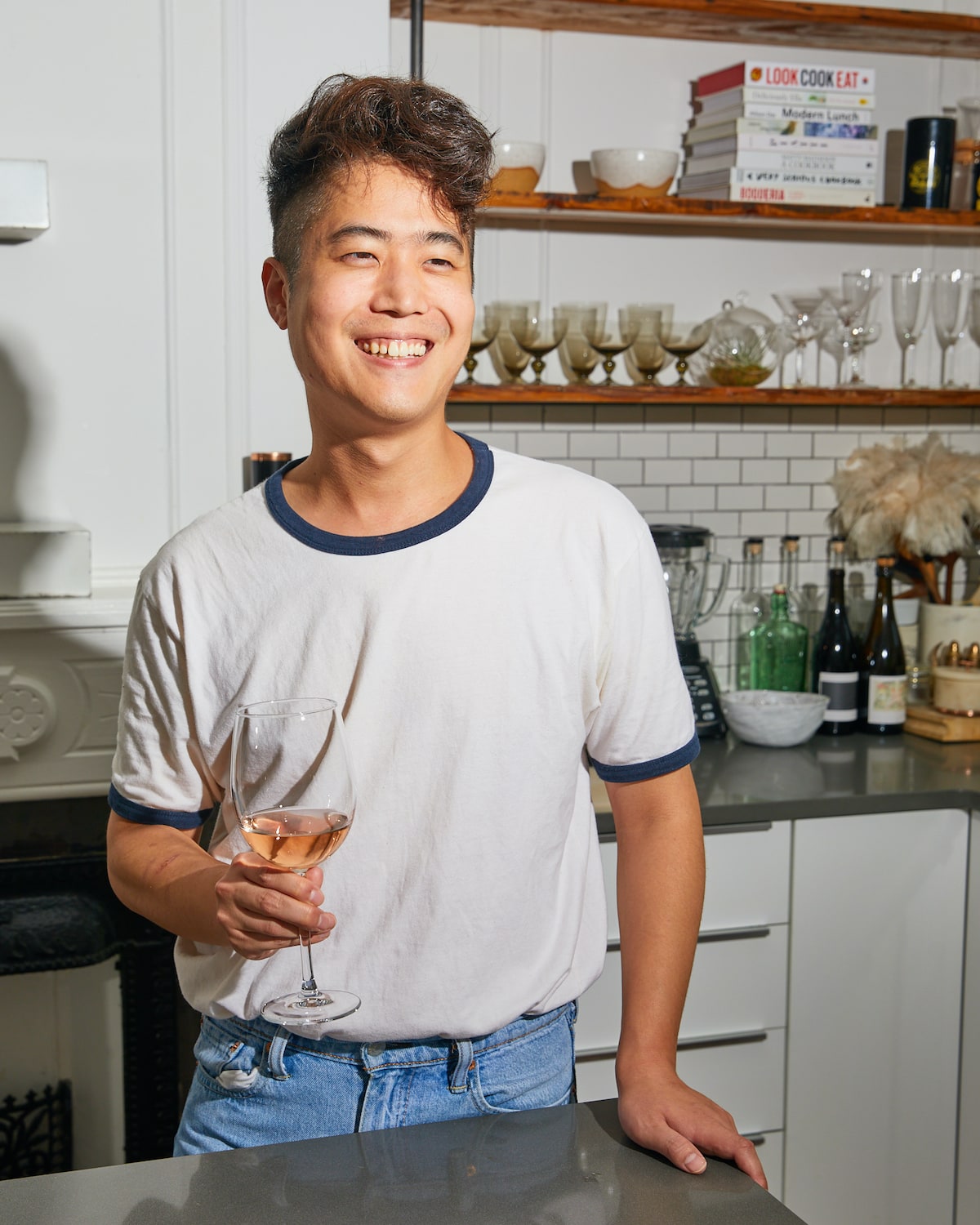 An Interview with Eric Kim, Author of the New Cookbook ‘Korean American: Food That Tastes Like Home‘

In which he spills the beans on where to find the best delivery kimchi.

Who is Korean American for, and why this cookbook as your first?

First, I want people to see this as both a Korean and an American cookbook. For this reason, I believed it to be important that “Korean American” isn’t hyphenated in the title. When you hyphenate Korean American, it becomes an adjective ("Korean-American food"); but by removing it, it becomes a noun ("American," attributed by "Korean"). I consider my mother to be the Korean half of the book, and I’m the American part. I want this cookbook to be found in the general category bookshelf at the bookstore, not in an “ethnic” or “international” shelf — because Korean food is American food.

The cookbook also has a memoir aspect to it. In that way, I’m hopeful that I can help people and their families feel seen.  Ultimately, Korean American is simply a story about a mother and her son cooking together.

You certainly made me feel seen, as a part Korean and American person. I also have to say that I loved your usage of Korean culinary words that I’ve never seen used before in cookbooks or recipes—words like gim (seaweed) or doenjang (soybean paste).

I like to look carefully at the way we use words. I learned this lesson early in my career, from a recipe I wrote in which I used gim for the first time. I actually didn’t think twice about using the word. But it’s interesting—as Koreans, we don’t have the same culinary diplomacy as other cuisines have, so it’s a bit harder for our terms to be adopted into the mainstream. The way I respond to that is to develop more recipes using these words—like gim—that I hope can go into the “mainstream” so that eventually, people will have these words in their own vocabulary. My goal is to get more Korean food words into the dictionary!

...as Koreans, we don’t have the same culinary diplomacy as other cuisines have.

There is also this tension of not wanting to play into the mainstream. I want us to build a new table where everyone gets to sit. There is power in driving that conversation. For instance, David Chang realized “bo sssam” could be adopted into regular language; he built a popular recipe and product that helped people adopt the term into the mainstream. Some staunch Koreans will come at recipes like that and say, “That’s not bo ssam!”, but that’s why he called it Momofuku’s Bo Ssam. We have to let cooks innovate without having the sole responsibility of driving the encyclopedic definition of a thing.

We have to let cooks innovate without having the sole responsibility of driving the encyclopedic definition of a thing.

There is a certain joy in knowing that you’re starting a conversation; I look forward to developing Korean recipes that use certain ingredients and words. I love the @NYT_first_said Twitter bot that tweets out words that have been used for the first time in the paper. I thought, “Yeahhh! I got the word ‘miyeokguk’ in the Times!”  It’s been exciting for me to watch Korean foods blow up so much. Now, everyone knows what kimchi tastes like.

Since writing this cookbook together with your mom—which sounded like such an intimate experience—how has your relationship with her or your views of her changed?

There’s a song, Opaline by Novo Amor, that I choose any time I flash the cover of my cookbook on Instagram. The song ends with the lyric, “I feel like I’m finally me.” And I feel like that. That’s what this book did.

I thought I was going to write some compendium of Korean cooking and recipes from all over the country, but I realized that was too hard. I realized that by telling my story and my mother’s story, I’m able to tell the Korean American story. Through writing, I learned my family’s history, my culture’s culinary history, and I even started forming my own opinions on how things should taste, etc. By writing this book, I felt like I was reconciling this sense of two parts of myself that was still straddling two countries.

By writing this book, I felt like I was reconciling this sense of two parts of myself that was still straddling two countries.

It all goes back to that choice about the title of the book—when you’re able to take away the hyphen in Korean-American, it’s just…Korean American. Both. I am both.

This book changed my life in very material ways, too. It got me a lot of jobs. Just the simple concept of getting a book deal—that opened a lot of doors for me.

I also went on an emotional journey and with the book, I was able to narrate that journey fully. I wasn’t coming at this as an expert, I was coming at it as a son. I was able to narrate my discovery process. By the end of reading this cookbook, I want readers to feel that they, too, have learned something.  I think I’m a teacher at heart, and I love that aspect of my job. Sometimes it’s not even about teaching—it’s more like, I just want you to know about this amazing thing, whether it’s a flavor combo or a weird dish I invented while drunk at midnight. I like sharing these discoveries.

I think I’m a teacher at heart, and I love that aspect of my job.

You write for major food media publications, some of which have recently ramped up coverage of Korean food. It’s suddenly very buzzy. Do you feel pressure to “represent” Korean cooking and recipes? Do you feel protective? How are you thinking about this?

My relationship to writing about Korean food has evolved so much in recent years. I am actually new to it. I first had to learn about it and decide where I stand. Overall, my stance is that I don't think you have to be from the culture to cook that culture's food. But acknowledging that power is part of that dynamic of cultural appropriation is important.

Cultural appropriation is not a thing you can define in a sentence; it’s so dependent on power, who are you in relation to a culture you’re writing about. If you’re coming at it from a reporter’s angle, and you provide all the research, provide all the context, and give credit where credit is due, then there is no reason why a white recipe developer can’t develop a Korean recipe. Cultural appropriation is all about power and people need to say and recognize that more.

As for me, I’ve spent my career developing Korean dishes that have American techniques or American dishes that are tinged with Korean flavor. I’m not likely to develop a straight-laced “traditional” Korean dish that perhaps your mom followed or developed in the 80’s, for example. Overall, I believe in being authentic. You just have to stay true to yourself. There will always be people who say, “Well, that’s not how my mom did it.”

I also love coming up with ways to use Korean pantry items—something like gochugaru, for instance. I love that ingredient. It’s so much more than just a heat source for stew; it has so much flavor in it.  For instance, if you bloom it in butter, you end up with a caramel-y, browned butter-like thing, like in the Gochugaru Salmon With Crispy Rice recipe. Like, maybe the first time someone uses it is to make a salmon dinner instead of making kimchi. It makes that exciting and takes this ingredient out of the “ethnic category.”

I want people to see that this is an American cookbook with Korean ingredients. Even the dishes that seem “Frankenstein-y” are based on dishes and techniques that already exist. For example, the Gochugaru Shrimp and Roasted-Seaweed Grits recipe in the book is a Southern dish mixed with Korean dishes you could say, but the shrimp is flavored with gochugaru, fish sauce, and garlic . The way the grits are prepared is actually inspired by Korean juk (Ed note: porridge). Ultimately, that dish has and is based on two Korean references and dishes that already exist.

I want people to see that this is an American cookbook with Korean ingredients.

Reader question: “What are some good starter recipes to introduce friends to Korean flavors?”

Hmmm, I’d say that overall, what I really want is for people to expand what their concept of a “pantry” is. If a recipe requires anchovy, capers, most people wouldn’t say, “This is so unrealistic, I can’t shop for this.” Like, yes, you have to go get all these things from H-Mart! It’s probably equidistant to your Publix! I’m trying to meet people where they are yet also expand what their concept of “pantry” means.

Do you have a pantry must-have or a favorite banchan (side dish)?

Must-have: Doenjang. I need multiple kinds. I want everyone to have doenjang in their fridge. It’s so good, especially if you pair it with honey.

Favorite Banchan: I always have a jar of kimchi in the fridge. My favorite brand is called Kim Chee Pride, Inc. and I get it on FreshDirect. This is the only kimchi I’ve had that tastes like home.

My dream is to one day own a kimchi fridge. Do you have any specific fantasies about your future dream kitchen?

I want a huge, long dining table as part of the kitchen. I want shelves all over. I’m inspired by what Nigella Lawson’s kitchen looks like, and even my tiny studio mimics that.

I want people to remember me for my writing. I don’t want people to know what my face looks like, actually. We are so oversaturated by individual “brands” right now and this concept of “viral influencer sensationalism” and I feel alienated by that sometimes. I do like attention but not that much attention!

Pre-order Korean American: Food That Tastes Like Home by Eric Kim, which is out on March 29th.

This interview has been edited for length and clarity.

‍Subscribe to the Girls' Night In newsletter for weekly email updates.