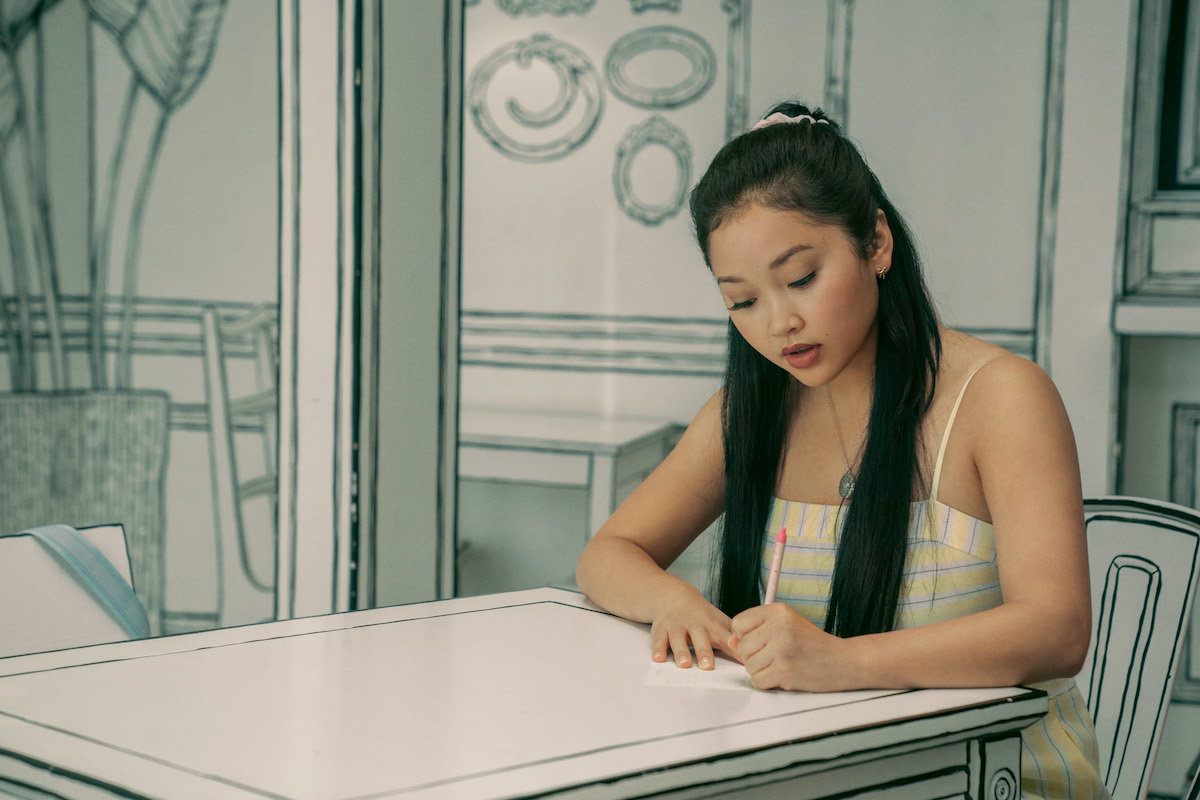 Jenny Han on Lara Jean, Her Korean Identity, and Closing the 'To All The Boys' Chapter

Alisha sits down with the author of everyone's favorite YA series.

Before starting the GNI newsletter, I wrote a much smaller newsletter called Mixed Feelings. It was about my experience moving through the world as a mixed-race person: I’m half Korean, half Dominican. Having this often-confusing racial identity has shaped so much of my life, even when I didn’t fully realize it. For instance, I was too young to realize it then, but I now understand that I was often seen as an “other” while growing up in Seoul, Korea. I was Korean in my blood, but my physical traits led others to believe I was something else, sometimes to my advantage (a compliment about my appearance) and sometimes to my disadvantage (blank, shocked stares at the mall when I spoke fluently in Korean). I didn’t fully belong, even though I spoke the language, chased down the yakult ajumma every week for a fresh batch of yogurty goodness, knew all the lyrics and dance moves to Roo-Ra (a popular K-Pop group in the 90’s), and rough-and-tumbled around with my full-Korean cousins on the weekends.

When my family moved to the States, my identity blended into the background. Or so it seemed, or so I willed it to seem that way. Here, I didn’t totally stick out like a sore thumb. My childhood was happy and carefree and diverse. When I got to college though, my racial identity floated back to the surface of nearly every interaction, opportunity, and insecurity. My blended-ness meant I could no longer blend in — everyone wanted to safely put me in a box. Am I Korean? Latina? Filipino? What are you? Was the #1 question I heard in my college years and beyond. Even here, I didn’t belong.

Last week, I listened to the latest Call Your Girlfriend episode featuring Jenny Han. I paused the episode to scribble something down: “…telling stories where being Asian isn’t the point.”  Through To All the Boys I’ve Loved Before, Jenny Han has created a story and a character in Lara Jean where being Asian isn’t the point. Her racial identity is not the only thing to define her or her story. Han was able to tell the story she wanted to tell, without being bogged down by the need to represent an entire race, or play up racial trauma or pain which is so often the case with BIPOC-centered pop culture.

Being Asian (or half-Asian) wasn’t the point in To All the Boys, yet…when I had the chance to sit down and ask Jenny some questions about her work, I couldn’t resist asking her all the questions about Korean identity, both hers and Lara Jean’s! On one hand, I was genuinely excited to see myself — a half-Korean! — represented on the screen. On the other hand, I was also asking her, “How did you do it? How did you escape this neat racial-identity-box everyone wants to put you and/or your characters into?!”

To All the Boys has brought lots of us great comfort over the past few years, but especially this year during the COVID-19 pandemic. Even as a non-teen, I found so much joy and coziness in this sweet movie series — so sitting down with its author was in many ways the cherry on top of it all.

AR: Hi Jenny! I wore my best Lara Jean-esque colors today, in honor of our chat.

JH: I love it. Your sweater is so fuzzy! I love a pink and red-orange moment.

I heard somewhere that you started writing the books almost a decade ago. How are you processing this chapter coming to a close?

Oh gosh, it’s a lot. I couldn’t sleep last night because I was really nervous. I tend to get really stressed out before one of the movies drops. I couldn't fall asleep until like 4:00 in the morning and I knew I had to wake up early to do more stuff. It's all so bittersweet —I'm excited to see what's next for everybody, but it's always sad to say goodbye.

Lara Jean is half Korean and you do a really great job of helping her explore her Korean roots and give very subtle nods to her identity, even though a really big part of her Korean identity, her mom, is missing from her life. How did you approach writing her as a half Korean character?

I think it was just really important to me to imagine a girl without a mother and the mother really was the link to part of her cultural identity. I think that sort of led to how close she is with her sisters. They became the mother figures in each other's lives, and they fill those holes for each other. In terms of research, I know a lot of friends and family who have biracial kids, and I was thinking about her mom as someone I would know — like a friend of mine — so it felt really natural to imagine.

How would you describe your relationship to your Korean identity?

I was raised in a suburban smallish town in Virginia and my high school did not have any other Asian kids. But then we went to a Korean church. So to a degree, I felt really connected to that part of my identity. Also my grandparents lived with us, so I think that because I had so many friends from church and then ended up at a high school with a ton of diversity, I was really proud to be Korean. I also visited Korea a lot as a kid. As a result, I think I've always felt pretty connected. I wish that I could speak the language better, though. I'm very rudimentary, so I can speak to my family and I can get around, but I couldn't go and have a job in Korea.

‍
In this final film, part of the story is that Lara Jean visits Korea. How has your experience visiting been, especially now being a very successful figure?

I always feel really humbled when I visit Korea because since my Korean isn't that great, I can be embarrassed and all that. When you’re in America, you’re not fully American. And then you’re in Korea and you’re not obviously Korean either. You have your foot in both places. So when you’re in one place, you’re longing for the other place. I personally do love going back to Korea, and I really wish I could have gone this year. I do feel like a sense of home when I’m there. But I also feel that sense of humility too.

‍
I’m wondering if there was a scene in any of the movies that you witnessed the filming of or wrote that didn't make the final cut that you kind of wish had been kept in the movies?

I would have loved to have had Beach Week! It’s a Virginia tradition of going to the beach after graduation and a lot of very dramatic stuff happens at Beach Week in the book. I loved going to Beach Week. It was wild that my parents let me go, since they wouldn’t even let me go to sleepovers. My sister should thank me for that because she got to go to her Beach Week, too, as a result!

You've built a cultural phenomenon through this series, and I think Lara Jean is such an iconic romance/YA character that will stand the test of time. That's huge, given that she’s an Asian character played by Lana Condor, an Asian actress. Do you feel a weight or expectation to write Asian-centered stories?

I do think about that a lot, and it is a lot of pressure. I struggle with it because I do feel that responsibility, but I think what it comes down to for me as an artist and as a writer is that I have to write the stories that I feel really led to write and feel creatively energized by. I don't think I can create with representation first on my mind. I think that the stories have to come from within and be organic.

There is so much conversation around the word “representation” and what that means right now. I think for me, I don't go into writing a story thinking, “This is going to be for representation!” It’s ultimately, how do I make this a really great story? And how do I serve these characters and make it really true to these characters? My home base is that you have to serve your characters first, and everything else will follow.

I would love to see [authors of color] have the freedom to explore many different kinds of stories, whatever they may be. There's a lot of challenges to being a creator of color because you do have that added pressure. I think when you're not a person of color you, you can just do whatever you want to do in a way. If I want to do a story about 18th century France, that's what I'm going to do. I don't want to ever limit myself.

I always want to feel free to write what I’m going to write and then it’s really up to the audience whether or not they want to receive it.
‍

I think “freedom” is a really good word, and I hope it will come with more representation. I've noticed that Lara Jean is such a well-balanced character. Is there a seminal scene in the films that you feel like communicates her character really well?

I didn't adapt the books to movies — that was one of the producers, but I would give notes on the scripts. I would say though that a big moment was in the first film when she goes out to the hot tub and is really brave. Like, wow, she's the one pushing that forward.

Lara Jean is shy and introverted, but she does have a steely core to her. She does go after what she wants and I'm always really proud of her in that scene.

Okay, I have some fast and fun questions for you, too. I know you have a TikTok, but do you have a favorite TikTok rabbit hole that you're into right now?

I like to watch celebrity gossip TikTok and Harry Potter TikTok, which always just comes back to…Draco. I also like cooking TikToks.

What's the best thing you've baked recently? I know, like Lara Jean, you're an avid baker.

I baked banana bread this week, but I only ate one piece of it and then I threw most of it away because I'm alone at the moment and… well, you can only have banana bread so many times.

Okay, last question — this one's from a GNI reader, Valerie: Which of your characters has the best self-care routine?

I would probably say that Lara Jean does because she bakes and that's kind of her mind setting itself at ease. It's like her way of like her own kind of therapy.

Are you super YA-curious now? Be sure to check out the To All the Boys book series, and you can watch the movie series on Netflix. Jenny Han is also working on a new series for Amazon based on her book, The Summer I Turned Pretty. She is also collaborating with Shonda Rhimes for a Netflix anthology series about love (love!).