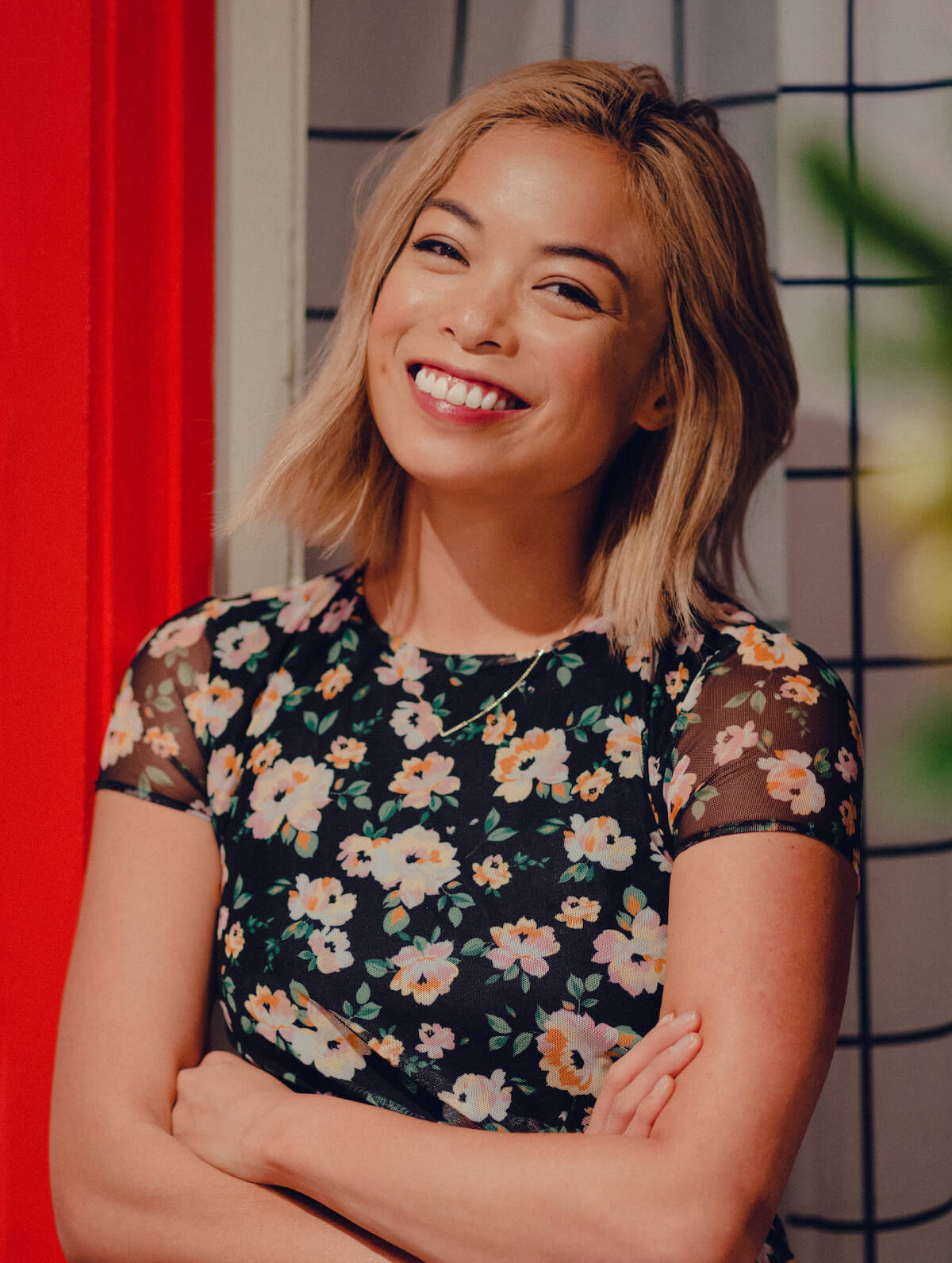 When we sat down with Jia to talk about everything from her debut book to scam culture and capitalism — like her book, she did not disappoint.

You likely know Jia Tolentino from her sometimes-biting, always-smart social commentary on Jezebel, The New Yorker, and a variety of other corners of the internet. Jia has a knack for perfectly articulating the way we see and feel the world around us, so when we found out she was writing Trick Mirror: Reflections on Self-Delusion, it was an obvious pick for our GNI Reads book club. I recently sat down with Jia to talk about everything from her debut book to scam culture and capitalism — like her book, she did not disappoint.

CM: You’ve been a professional writer for many years but this is your first book. How has writing this collection of essays been different from the pieces you’ve written in the past?

‍
JT: Writing these essays, there was basically unlimited space to spread out — in a way that felt a little like a continuation of what it was like to run a blog and be able to write as long (or as short!) as I wanted all the time. The way the book felt the most different was that, for a year and a half, I got the luxury of writing this thing entirely in private, feeling like I was writing it just for myself.

The reception to Trick Mirror has been incredible. What has been your favorite or most surprising response to the book so far?

‍
The entire response to the book has been wildly surprising to me, almost terrifying, incredibly wonderful — the whole time I was working, I just thought about finishing the book; I basically never thought about the book actually coming out. I knew I was expecting a lot from a hypothetical reader, and I am amazed at how many people have been willing to meet me in a place that’s self-interrogative, challenging, intense. I feel very grateful to feel so unexpectedly connected, in an unexpected way, to so many people — to have this really concrete reminder that so many of us are worried about the same things, that we want the world to be different, and better, in a similar way.

You spend some time in the introduction talking about the role that writing plays in your life and how it helps you sort out the world around you. How has writing this book shaped or changed the way you think about feminism, internet culture, marriage, etc.? Did you discover things about yourself or your feelings through these essays?

‍
I can only figure out what I think through writing, so everything I write shapes my thinking on what I write about. In writing this book, I discovered, probably, that all of my concerns are more interconnected than I had thought.

In your essay, “A Story of a Generation in Seven Scams”, you introduce the idea of the feminist scammer where you perfectly articulate how feminism can feel both empowering and impactful but at the same time commercialized and exploitative. What ways can companies that are created for womxn and nonbinary people like us work harder to stay on the right side of the ethical line?

‍
The internet (and capitalism generally, maybe) prioritizes representations of things rather than those things themselves. I think it’s a good practice today for anyone who’s professionally involved with commodified feminism (a cohort in which I count myself) to continually evaluate the degree to which we’re concerned with the representation of empowerment and feminism rather than the actuality of these things, and to be willing to adjust accordingly, even when it means eschewing opportunities that might be lucrative but might also be performative or fake or contrary to our deeply felt ideals. I also generally think that the most marketable version of feminism tends to be the least useful one, the least politically meaningful one, and I think it’s worthwhile to sit with any discomfort that thought produces, rather than run away from it.

More generally in that essay, you accurately point out how we as a culture are obsessed with hearing scams. At GNI we’ve even chosen Rachel DeLoache Williams’ new book on the Ana Delvey scam as our November book club pick. However, the scams in your essay provide a much more sobering, less “entertaining” view of scams we encounter every day. What’s one takeaway you want to leave people with from this essay?

‍
If there’s a takeaway from the scam essay, it might be that none of us are immune from participation in systems and structures that exploit people’s trust for profit. In today’s world, it’s easy to have a reflexive desire to feel that you’re on the good side of history, or whatever — I find that to be a defense mechanism that almost never leads anywhere good.

Of the many important topics this book tackles, you also chose to include discussions around sexual violence and the #MeToo movement. Why was it important to you to include these essays in the book?

‍I care a lot about sexual violence and the monstrously complex shift we’re undergoing in terms of gender politics and gender equity, and I also think that these subjects are hard to write about well, in terms of tone and nuance and clarity and directness. So I keep trying to figure out how to keep writing about them in a way that will move a conversation forward, and that will somehow be able to reflect the multivalence of all this change.

Were there essays or topics that didn’t make it into the book that you wish you could have included?

‍
I actually pitched the book exactly like I wrote it — I was careful to figure out, before I decided to write a book, if there were a sufficient number of subjects I was interested enough in (and that were rich enough in themselves) that I could spend two or three years writing and talking about them, so there was a sort of research and testing process that took place before I started to actually write.

What’s next for you?

‍
I have no idea! I don’t really think too much about the future. I’m hoping that I figure out a way to work less, to stop producing so much, but I also am conscious of being really, really lucky in loving writing so much, and having the ability to do it, and having a really good job that I love.

The way you talk about the role of writing in your life is almost like a form of self-care. How do you balance writing as a career with the writing you do to feel or heal?

‍
I do very little writing to feel or heal specifically, but a lot of my writing is like that, for me, in some way or another. I’m writing about agony and anxiety and pleasure all the time. I have no balance in my life in one sense — I work so much, I am pathologically busy, I have an intense social life — but in another sense, everything’s balanced: I’ve found a way to find most of what I need in what I have.

In your essay, “Always Be Optimizing”, you talk about how the exhausting beauty work womxn go through has been re-named “self-care” as a way to make it sound more progressive. As a company that champions the value of taking care — in whatever form that works for you — how do you think we can reclaim the term “self-care” to truly be about taking care?

‍
I don’t feel equipped to answer that question! I do think that self-care has been widely reinterpreted as an end in itself, rather than a means to an end — like, a way to have a better life, rather than a way to equip oneself to be a better community member and citizen, a la Audre Lorde. Which isn’t to say that taking care of one’s self with the goal of improving one’s life is an unimportant act — it’s just not an act that, for me, really warrants the progressive feminist aura that surrounds the word “self-care.” What we’re talking about might be the difference between wanting to better adapt to a system and wanting to fundamentally bring it down.

We appreciate your take on unruly women in the essay, “The Cult of the Difficult Woman.” Which women are currently inspiring you?

‍
I’m inspired by progressive women working in criminal justice, women in the National Domestic Workers Alliance, Make the Road, and Fight for 15 — carceral reform, labor rights, immigrant rights, and the movement for a higher minimum wage are women’s issues that don’t often get talked about as such.

Favorite essay in Trick Mirror?
Ecstasy is my favorite — as with ecstatic moments in themselves, this essay both gave me a break from the here and now and situated me deeper inside it.

Favorite reality TV show (excluding Girls vs. Boys, of course)?
I actually don’t watch reality TV, maybe because of Girls vs. Boys! I used to watch Shark Tank when I was hungover, and otherwise have totally avoided the genre — if I’m going to decompress I’d rather get high and read.

The last amazing book you read?‍

The Memory Police, by Yoko Ogawa — one of the best books I’ve ever read about collective loss.